MADE in East Lothian unveils the second public artwork, Witch 1 Were You?

A new mural titled Witch 1 Were You? has been designed and painted by historian, artist, and writer Charles Fletcher. It was commissioned by MADE in East Lothian as part of a community art project started in 2020 and funded by the local Area Partnership.

The mural was completed last week on the front of MADE’s Arts Hub in Haddington’s busy Hardgate. It is visible to hundreds of passers-by each day.

This second mural draws attention to 219 ordinary citizens of Haddington who were accused of witchcraft in the 16th and 17th centuries. At least fourteen were found guilty and put to death. Haddingtonshire had the highest number of accused witches, with women over 40 most likely to be accused.

The mural is based on one of the only contemporary images of Scottish witches, a woodcut believed to have been produced in 1591 by Mr James Carmichael, minister of Haddington. The ‘witches’ in my mural are East Lothian residents, associated in some way with MADE in East Lothian. I wanted to commemorate the 219 accused by emphasising that they were ordinary people, and just like the residents of Haddington in 2021.

Further information about the persecution of “witches” is available on Charles Fletcher’s extensive notes. Using a QR code located next to the mural, passers-by can link directly to these notes. 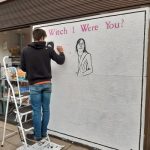 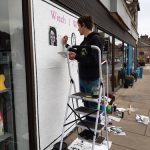 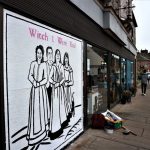 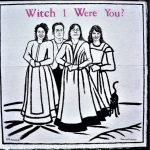